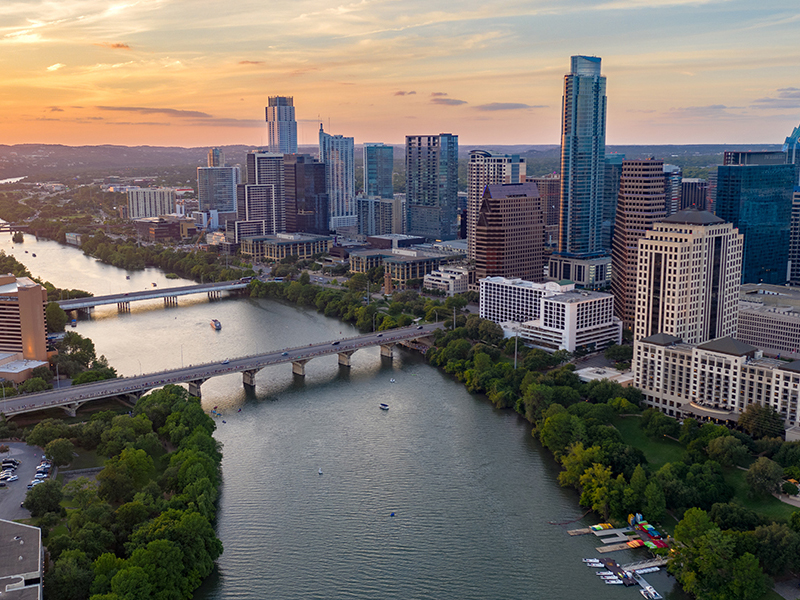 13 Reasons to Live in Austin

Why You Should Consider Living in Austin

The wild, warm city of Austin, Texas is many things to many people: it’s a music haven, a foodie paradise, a land of entrepreneurial opportunity, and—according to exhaustive lists published by all sorts of magazines lately—a great place to raise kids, enjoy the outdoors, be single, start a business, or engage in any number of other pursuits. For those deciding whether or not to put down roots in the capital of the Lone Star State, we present 10 reasons to call Austin home for the long haul.

It never skips a beat. Music lovers are never, ever bored in the Live Music Capital of the World. With more than 250 live music venues and 2,000 local musicians who call Austin home, the city marches to the beat of its own drum and is almost always swaying along to one song or another.

It’s almost outlandishly friendly. An odd little phenomenon takes place in Austin nearly every day, but strangely, it’s rarely talked about. In most major cities, four-way traffic stops are essentially a game of chicken with everyone trying to outrun one another, but here, it’s more like a battle of politeness in which everyone tells everyone else to go first. It’s a great illustration of the genuine warmth Austinites are known for. The city prides itself on caring about people—a trait that actually landed it on Conde Nast Traveler’s list of the friendliest cities in the United States.

Flavorful foods abound. Whether you’re in the mood for world-class BBQ, casual Tex-Mex, fine dining, or a food truck serving up vegan fare, sno-cones, pizza or banh mi, there’s something to satisfy your appetite in Austin. Quickly becoming a haven for foodies, its “can do” spirit and collective open-mindedness make it a hospitable place to open a new eatery. A bevy of restaurateurs have taken advantage of that in recent years,  much to the delight of taste buds all across town.

Sunshine, sunshine, all year round. Making it a bright counterpoint to its equally weird (unofficial) sister city in the Pacific Northwest, the sun shines in Austin at least 300 days a year. Summers are awfully hot, but the payoff is priceless throughout the rest of the year, with average temps in the very comfortable 60s, 70s and 80s.

It loves its festivals. Find a weekend in Austin without a festival of some sort and you’ve found a weekend that doesn’t exist. From the history of a favorite downtown street and every imaginable genre of music to pride in the city’s own weirdness and even an annual acknowledgement of a Winnie the Pooh character’s birthday, Austin finds something to celebrate more than 50 times each year.

It treats humans like humans. It’s no small potatoes that Austin earned a 100 on the Human Rights Campaign’s Municipal Equality Index in 2016. With perfect scores in areas related to non-discrimination laws, municipal services, and its relationship with the LGBTQ community, this inclusive city is known for its emphasis on equality, letting goodwill triumph above all else.

It’s becoming more bikeable. Ranking #7 in Bicycling magazine’s 50 Best Bike Cities of 2016, Austin has installed separated bike lanes alongside a handful of city streets in recent years and added a number of shared lanes to downtown roads, making it easier for cyclists to get around town. Add to that the beauty and convenience of the hike and bike trail around Lady Bird Lake as well as a cycling trail named (for better or worse) after a once-lauded Tour de France champion, and you’ve got a city trying to make it simple to move about on two wheels.

It’s tech savvy. The birthplace of Dell in the 1990s has since made a name for itself in the tech world, earning the nickname “Silicon Hills” for its abundant hill country and burgeoning tech industry. Its tech startup scene is strong, with incubators, accelerators and investors densely concentrated in one place. It’s often a beta tester for new apps and technologies that haven’t fully launched just yet.

It’s easy being green. Thanks in part to a bag ban put in place in 2013, Austin takes seriously its commitment to keeping its carbon footprint small. Reusable bags and bottles far outweigh their throwaway counterparts, and transportation options are growing greener by the minute, with bikeshare and rideshare brands thriving around town and a strong recycling program taking over the city’s street corners.

Hiking, biking and waterfalls, oh my! Probably one of the best things about Austin is the proximity of nature, no matter which part of the city you reside in. Within its city limits, Austin boasts several hundred miles of hiking and biking trails, like the Barton Creek Greenbelt or Lady Bird Lake trail. And when you want to cool down after working up a sweat (or not), there are over a dozen gorgeous waterfalls which double as swimming holes. Check out Hidden Falls along Bull Creek or hike in to Sculpture Falls along the Greenbelt.

It’s easy to go on road trips galore. Not only is San Antonio about an hour away, you can get to the “third coast” on the Gulf of Mexico in about 3 hours for a year-round beach vacation! For a big city adventure, Houston is 2.5 hours away and the Dallas-Fort Worth metroplex is less than 3 hours driving distance. (In case you don't feel like driving, luxury bus line Vonlane goes nonstop to both cities.) For a fun daytrip, you can head to the beautiful Hill Country area, where local wineries and tiny, traditionally German and Czech towns are nestled among tree-covered hills and valleys.

A ridiculous number of state parks are nearby. Nature lovers in Austin are a super lucky bunch! Within 20 minutes to 3 hours, you can drive to almost TWENTY different state parks and natural sites (including Bastrop, McKinney State Falls, Enchanted Rock or Pedernales Falls) for a whole host of activities: camping, hiking, water sports, mountain biking, rock climbing, geo-caching, bird watching, fishing or just immersing yourself in the beauty of wide open Texas nature.

There are excellent flight options. As Austin continues to grow, the Austin Bergstrom airport (AUS) has been trying to keep up by quickly adding more airlines and nonstop routes to a greater variety of destinations. It's still a very friendly and uncomplicated airport, but you can fly nonstop to many popular destinations in the U.S. like NYC, Los Angeles, New Orleans or Seattle, as well as to an increasing number of international cities, including London; Toronto; Frankfurt, Germany and San Jose, Costa Rica. But if you find a better flight from San Antonio's airport (SAT), you can drive there in an hour or just book yourself a cheap MegaBus ticket.

- By Amy Wilde and Suchi Rudra

Read More About Living in Austin

5 Things to Know About the Austin Real Estate Market

The New Hottest Neighborhoods in Austin